Unfit for Purpose: The case against Rational Emotive and Cognitive Behavioural Therapy (RE & CBT)

This book has been revised and updated, with a new Preface, with the following title:

A Major Critique of REBT: 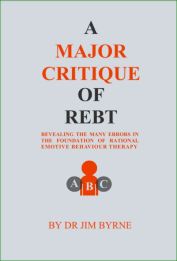 This book is a devastating critique of the foundations of REBT. There was a need to clarify the bottom line of Dr Byrne’s 500 page critique of REBT, and that has been done in a 22 page preface to this reissued, 2019 edition. (This has now also been released as a low-cost, Kindle eBook, on 31st January 2020).

Also, we have added a reference to the research which shows that emotional pain and physical pain are both mediated and processed through significantly overlapping neural networks, which contradicts Dr Ellis’s claim that nobody could hurt you, except by hitting you with a baseball bat or a brick.

This is a comprehensive, scientific and philosophical  critique of the foundations of Rational Emotive Behaviour Therapy, as developed by Dr Albert Ellis; including the dismantling of the philosophical foundations of the ABC model; and a decimating critique of the concept of unconditional self-acceptance. Almost nothing is left of REBT when the dust settles, apart from the system called Rational Emotive Imagery, which Dr Ellis borrowed from Maxi Maultsby.

Available in paperback and eBook formats.