The tenth anniversary of the death of Dr Albert Ellis

Reflection on the Legacy of Albert Ellis

Every year since 2008, on the anniversary of the death of Dr Albert Ellis – which occurred on 24th July 2007 – we have published our thoughts on this man and his work, in an effort to digest our relationship with him and his ideas.

As the years have gone by, we have found more and more weaknesses and errors in his work, and we have published many of them here.***

This year, we want to post an extract from the Preface of Jim’s new book on REBT, which is described here.***

A statement by Dr Jim Byrne

I was introduced to REBT in 1992, by my wife, Renata.  The circumstances were that I was going through a very stressful career crisis – which is ‘middle class speak’ for the fact that ‘I was about to lose my income’, and my ‘status’.  I was about to retire (at the age of 47 years), from a deputy chief executive role, in an educational charity that I had co-founded, in order to facilitate the continuance of that company for the benefit of others.  But my bravery in stepping out was not matched by my guts and heart, which were in a state of panic, alternating with a profound sense of loss (and depressed mood).

Renata handed me a copy of Dr Albert Ellis’s book, Executive Leadership[i]; I read it; I found it helpful; and I extracted the core lessons, which were:

On the face of it, this seemed like a very helpful new philosophy of life.  I could not see any downside (at that stage), and so I adopted this new philosophy of life, with gusto, but it took several years before I overcame my practical problem in relation to my career, and my emotional difficulties with those challenges.  All along the way, I attributed every gain in my self-recovery to REBT, and overlooked the fact that I was exercising physically, meditating daily, doing daily affirmations, using audio hypnosis, and using several other strategies.

It would take fifteen years before I would begin to see any problems with REBT, and then the whole house of cards would gradually tumble around me.

So much for me: the author of this book.  And now for the book. 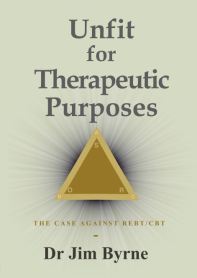 This book is a critical analysis of the foundations of Rational Emotive Behaviour Therapy (REBT), which is sometimes called Rational Emotive and Cognitive Behaviour Therapy (RE & CBT).  (Some aspects of REBT – like the ABC model – are common to all forms of CBT, and, to that extent, much of my critique of REBT could also be applied to those elements of CBT in general).

When I first published my earlier book on REBT (Byrne, 2013), which focused more directly on the childhood of Albert Ellis and how his childhood had shaped the later-development of his system of Rational Therapy, I was asked by one of Ellis’s fans: “But what about his legacy?”

Here is my answer to that question:

To the degree that Dr Albert Ellis was promoting a moderate (or reasonable) Stoic philosophy of life, he was to that degree being helpful and therapeutic, for his direct clients, his book readers, and the wider world which got to hear his proclamations. Reasonable or moderate Stoicism is, for me, typified by the statement that there are certain things we can control and certain things we can’t. And that our freedom and happiness depend upon distinguishing those two categories from each other, and then training ourselves to try to control only what seems realistically likely to be controllable in practice.

However, to the degree to which he was promoting extreme (or unrealistic) Stoic approaches, he was to that extent being unhelpful and anti-therapeutic, for his direct clients, his book readers, and the wider world which eventually would hear his pronouncements. For me, extreme or unrealistic Stoicism is typified by the statement by Epictetus which claims that people are not upset by what happens to them, but rather by the attitude they adopt towards what happens to them.

The best critique of this extremist philosophy that I have seen was presented by Bertrand Russell, who said that this kind of viewpoint could never be upheld by anybody who had spent a small amount of time walking into a force nine gale with icy rain, and in an underdressed condition.

Such a person could not maintain their equanimity, or be happy, or be anything less than totally miserable, and feel as if they were soon to die a miserable death.  And that would not be exclusively or even significantly a function of their beliefs or attitudes, but rather because of the adverse effect of the environment upon the whole body-brain-mind of that individual.

In this book, I will argue that Dr Albert Ellis was, to a significant degree, an extreme Stoic, and that to that degree he was a destructive, harmful influence, not just within the world of counselling and therapy, but – because there are no Chinese walls between the therapy room and the wider society – also on the political-economic discourse of the period from 1975 onwards, when some of the worst forms of neoliberal insensitivity to the suffering of the poor arose in the US and Britain.

Beyond that point, on the legacy of Dr Ellis, I would add that, to the degree that he was popularizing some forms of behavioural desensitization, he was performing a helpful role.  But, to the degree that he was promoting in vivo flooding – or ‘throwing clients into the deep end of the emotional swimming pool’ – he was probably often making a mistake, and promoting a cruel form of exposure, when gentler forms exist.

And his system of Rational Emotive Imagery – where the client is encouraged to get in touch with a feared memory from the past, for example, and then to reduce its intensity – which he borrowed from Maxie Maultsby Jr – was a good contribution.

To the degree that he helped some individuals to think about their reactions to noxious stimuli – he may have been helpful – but only in those cases where the individual was able to process their thinking, because it was not ‘walled off’. (Joines and Stewart, 2002).

According to Stewart and Joines’ system of personality adaptations, only certain clients can benefit from being helped to improve their thinking about their behaviour.  Others need to be helped to integrate their feelings with their behaviour. Since discovering Joines and Stewart’s Personality Adaptations system, I have found that some of my clients benefit from a focus upon their feelings, and not at all upon their thinking.

Then there’s Ellis’s amoralism.  This was written into his system of REBT, in that he discouraged the use of ‘should’, ‘must’, ‘ought’, etc. But these words are essential for the maintenance of any moral discourse.  He only ever advised his clients to be prudent, and not moral; and he taught them to accept themselves unconditionally, which meant – “even if you go out and kill a few people, how could that make you bad?!”  Mad amoralism, or indeed, immorality!

And, perhaps his biggest negative contribution: His ABC model suggests that people are always and only upset by their Beliefs (which is ‘B’ in the ABC model), and that they choose their B’s, and therefore they choose to upset themselves.

He insisted that people are not upset by what happens to them; “How could anybody make you feel anything, except with a baseball bat?!” he would demand to know.

In fact, the ‘A’, or Activating Event, triggers the problem, as shown by Bertrand Russell in his force nine gale example above. And human beliefs tend to be socialized into us long before we can think or choose anything.

And, in any event, it is not a ‘B’ or Belief that intervenes between an Activating event and an emotional response, but rather the whole body-brain-mind of the socialized-individual.

And that body-brain-mind responds differently depending upon such factors as sleep pattern, diet and nutrition, level of physical exercise, state of gut bacteria, and so on.  Our emotional and behavioural reactions to difficult events are not simple results of mental beliefs.

So what is the legacy of Dr Albert Ellis?

Then, using a combination of ideas derived from individual constructivism (and other cognitive insights which were either neo-Piagetian or post-Piagetian, or based on the Information processing school of thought), plus Pavlov’s conditioning, neobehaviourism, and some aspects of Stoicism and Buddhism, he created a cool and detached system of therapy which saw emotion as a mere effect of cognition, (or, in everyday language, a result of thinking!), as opposed to the more modern view of humans as emotional beings who can also think (to some degree): (Hill, 2015; Siegel, 2015; Panksepp, 1998).

Albert Ellis dumped the Stimulus-Organism-Response (SOR) model (of neo-behaviourism), which had the virtue of recognizing that it was the whole human organism (or primate organism; or the whole of the experimental rat’s central nervous system) that processed the incoming stimulus, and provided the outgoing response.  And he replaced that model with his simple ABC model, in which the only factor implicated in the causation of disturbed emotional outputs by a person were assumed to be that person’s own ‘irrational ideas’, ‘irrational beliefs’ (or thoughts!).  This was a most unhelpful development, which is only now being corrected, nearly sixty years later

The aim of this book is to deconstruct the ABC’s of REBT/CBT, and extreme Stoicism, and to replace them with a more holistic, more human, and more realistic model of the whole-body-brain-mind-environment-complexity which is what a human being truly is. But this is not mere humanism of the kind developed by Carl Rogers and Abraham Maslow.  This is a new kind of holistic, organism-environment-dialectic. It could not have been anticipated by Dr Albert Ellis, who learned his psychology in the 1930’s and 40’s.  But my critique of REBT depends upon the most recent neuroscientific discoveries; their elaboration into ‘affect-regulation theory’ and ‘interpersonal neurobiology’ (IPN); plus very recent research on the gut-brain-connection. Plus the biochemistry of physical exercise and the stress response. This new cutting-edge philosophy of psychotherapy is called Emotive-Cognitive Embodied Narrative Therapy (E-CENT).

That’s all for this year.

Get the book here, now:

Or take a look at the earlier book about the childhood of Albert Ellis:

Albert Ellis’s childhood and the strengths and limitations of REBT, by Dr Jim Byrne

‘A Wounded psychotherapist’ is a critical enquiry by Dr Jim Byrne.  It is an analysis of both the childhood of Dr Albert Ellis (the creator of Rational Emotive Behaviour Therapy [REBT]), and how some of those childhood experiences most likely gave rise to certain features of his later philosophy of psychotherapy.  If you have ever wondered what the roots of REBT might have been, then this is the book for you.  it explores the childhood difficulties of Albert Ellis, and links those difficulties forward to the ways in which REBT was eventually shaped.  It also identified the strengths and weaknesses of REBT, and proposes an agenda for reform of this radical system of psychotherapy. Available now from Amazon, in two formats:

Buy it now: A Wounded Psychotherapist: The childhood of Albert Ellis, and the limitations of REBT/CBT